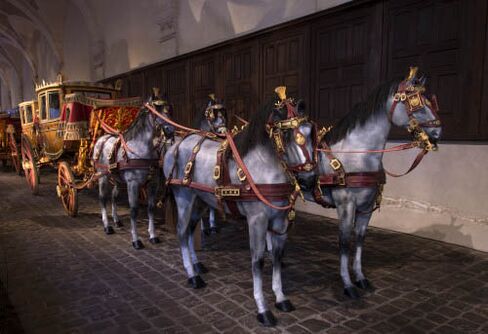 If Napoleon had lived to see the year 2016, he might be zipping across the French countryside in a Bugatti. Yet that $2.6 million beauty wouldn’t warrant a test drive compared to the rides he sported back in the 18th and 19th centuries: fully gilded carriages with crimson velvet interiors, retractable stairs, monogrammed wood carvings, and eight-stallion horsepower. A dozen of these carriagesused by Napoleon and his kin for weddings, coronations, baptisms, and moreare now the focus of a new museum on the grounds of Versailles, La Gallerie Des Carrosses, which reopened in the palaces former stables on May 10 after a nine-year closure and restoration.

Its curators are calling it the best auto show of the 18th and 19th centuries, but the Gallerie is more than a collection of shiny vintage cars. Even after a tour of the palace, with its toile-covered bedchambers, hallowed cathedral, and nearly 2,000-acre gardens, the carriage collection makes a strong statement about life during the pre-revolutionary Ancien Regime.

Take, for instance, a series of six compact sedan chairs. These plush, fully enclosed seats allowed individual members of the aristocracy to be carried by bearers rather than navigating the palace on their own two feet.

More visually impressive are the collections two prized pieces: a pair of carriages originally commissioned by Louis XVIII. One, an eight-horse coronation coach built in Reims by master coachbuilder Dalgringen, includes state-of-the-art suspension systems, ornate wood carvings, fold-away seats, gold thread embroidery, and a sculpted cornice. No surprise, the insignias used by Louis XVIII and Charles X were replaced with Napoleons monogram before the christening of Napoleon III’s son in 1856, which would be the carriages final public appearance. The other, a funerary coach for Louis XVIII, is draped in regal black and white silk velvet and decorated with symbols of resurrection and the French monarchy.

Among the other curiosities on display are a stroller for the future Louis XVII, which has a bronze and wood frame, red leather interiors, and nail head trim; a collection of sleds carved to resemble tortoises and bears; and an extensive collection equestrian regalia. All are displayed in ascending order, from modern times to old and from sensible to ostentatious.

Perhaps the ultimate sign of how times have changed, though, is the cost of entry: free.