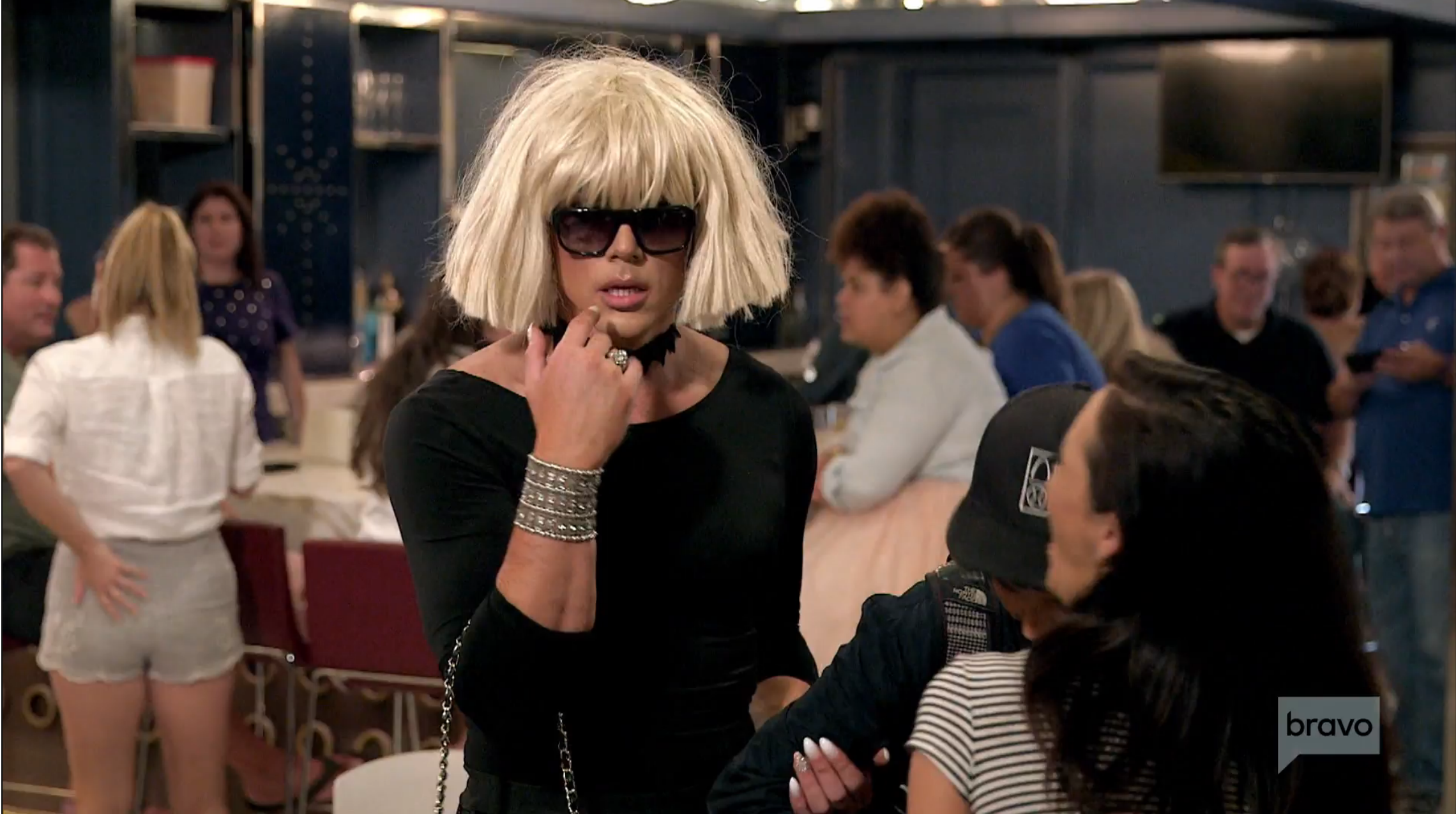 Welcome to another week of . For what its worth, last weeks episode was called Beads, Beers and Tears and this weeks is called Man Tears and Braziers, so whoever is naming these episodes needs a new job. They really just want us to know somebody ended up drunk crying at this bachelorette party. Tears, at a bachelorette party? Groundbreaking.

Guess they should have read our article on what not to do.

I would also like to take the time to note that I am not down with this new Bravo logo.

Bravos shooting B-roll of everyone being hungover and Tom and Ariana making out. Vomit.

Jax: I drank half of New Orleans last night.

Thats a good quote, Im gonna use that next time I drink half of Manhattan. Or more accurately, Brooklyn.

Jax: I love you but this is like kicking a dead horse. Wait thats not right, is it?

Schwartz wakes Katie up to be like you were mean to me. And you think waking someone up when theyre hungover af to confront them isnt going to make them even more mean to you?

Katie didnt feel safe walking in a large co-ed group of friends in the middle of Bourbon Street ok.

Katie: Its like Im in the dang right now. If only I had a Noah and not a Tom.

Thats a great thing to say about your soon-to-be husband.

Brittany: The boys acted like weirdos last night. Jax was crying and stuff and acting like a homosexual.

Arianas going with the guys on a boat tour because God forbid she go to a nice restaurant for brunch and do something typically feminine for once. Arianas like I wanna see some fuckin gators arent you from Florida?

Jax: I think Tom may *possibly* be drinking to cope with his issues with Katie.

Somebody get this dude a Psychology degree. Doctor Jax Taylor over here.

Why did I just see Sandovals ass, though? Somebody pass me the eye bleach.

These girls are passing out personalized Live Strong bracelets like its fucking 2001.

Scheana is still on her I hate seafood thing. In the middle of New Orleans. Bitch. She actually gets up and leaves the table because shes SO offended by seafood. Im glad she didnt blow that out of proportion at all, that would’ve been rude.

Apparently Katie fights with Tom all the time because of the Vegas girl. If you dont remember WTF Im talking about its because that shit happened in 2014 and you would think she wouldve moved on if she agreed to marry him. But yeah so anyway, recap: Schwartz made out with some girl in Vegas, which we all know means fucked.

Kristen: We just need to get Schwartz to admit he fucked some other girl before the wedding, that will fix everything.

What the . are you. I think Im having an aneurysm.

At the crab boil Carter brings up the Vegas chick and Toms like Ugh dude could you not? I’m not tryna keep up a years-long lie at my bachelor party.

Schwartz: Weve had horrible problems before that and after that.

Take a shot for every time you question why Tom and Katie are getting married.

Jax: Why are you getting married? You dont wanna spend the rest of your life like this.

HOW IS JAX THE FUCKING VOICE OF REASON ON THIS SHOW? HOW???

Sandoval starts crying because Schwartz cant just be miserable without Sandoval making this situation about him.

Lisa: We just try to switch the menu up by adding specials, and if they do really well, we *dramatic pause* add them to the menu.

Thanks Lisa, for explaining how restaurants work.

Everyones doing makeup and a cake gets delivered and the girl who delivers the cake is a stripper and Im getting slightly turned on and I cant be watching this at work, I gotta go.

Ariana: Every drag queen has to have a drag mother

I was gonna criticize Jax for being down to wear makeup but drawing the line at having his dick taped, but honestly thats pretty reasonable.

The girls are all chanting Slap it! Slap it! while the stripper is twerking in a thong. #StopWhitePeople

Ariana: So many gender stereotypes are being broken right now. We are blurring the lines of what it means to be a man and a woman in todays society.

Not all heroes wear capes.

Stassi: Im feeling really insecure because she was doing things with her butt that I didnt even know could happen.

^Me in the club/everytime I watch a rap video

This sports bar allows dogs? Somebody call the health department.

Schwartz: Im getting married.
Random girls: Do you want a shot?
Schwartz: No!! Maybe. Actually can I get that in an IV?

Schwartz just told a girl she can play with his penis. Somewhere in the distance I hear the sound of Katies head exploding.

Bravo is really trying me with the footage of Jax peeing. Who are they taking their cinematography cues from, Lena Dunham? Next season on : footage from inside Jaxs assholeno thanks.

OF COURSE they went on a murder tour. Not gonna lie Stassi and I would be BFFs. I love murder (shit only white people say).

How tf did Shay get sun poisoning coming to New Orleans from fucking Los Angeles?

Stassi: If I took Sandovals photo in drag and put it on my dating app, hed get more likes than I would.

Damn Stassi, do we need to help you find some self-esteem? Do you need to come back on our podcast?

Katie: I know Tom and I fight but we are able to forgive each other and I know that doesnt make sense to a lot of people.

IDK Katie, I think plenty of people are familiar with the concept of forgiveness.

Kristen is sober and is confronting Schwartz about the cheating rumors while hes very clearly shitfaced. Seems fair.

If this is a lie, Im pretty impressed that Schwartz is able to uphold it while hes slurring his words. 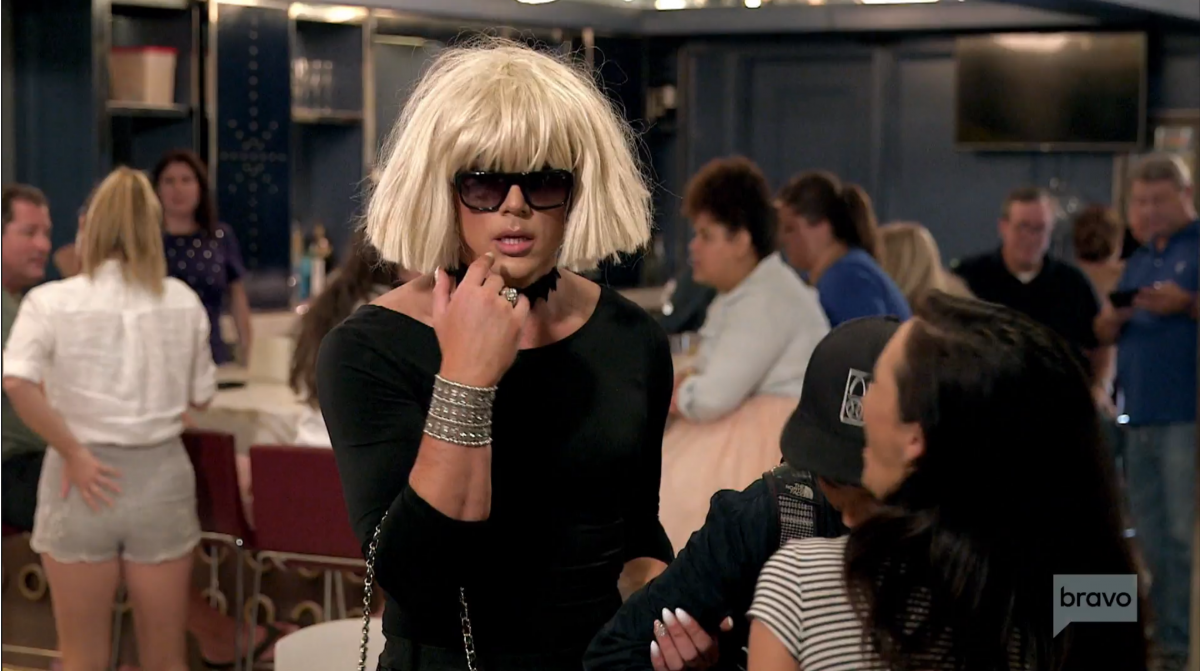 Schwartz: Kristens a psycho bitch whore.
Sandoval: OMG Brittany!
Schwartz: You were thinking it!
Sandoval: Yeah, but you said it!

Carters like watch your mouth and the Toms are like its not mean if its true. I mean, I don’t disagree.

Carter: You grew up and you became Sia.

The wigs are off, shits getting real.

Sandovals like I know you didnt fuck that girl. I know that because I have eyes on your penis at all times.

Katie was like I didnt wanna make it public knowledge but shes on a reality TV show.

Schwartz is like Im done with Katie. Im not marrying her. Im sure he definitely meant that and this isnt just a bullshit cliffhanger so Ill watch next episode.