Move over, BPA. Step aside, parabens. Perfluorocarbons are the environment’s new public enemy number one. The compounds, found in many common household items (look for keywords like “nonstick” or “stain-resistant”), have been the subject of several incriminating exposes in recent years.

Last year, PFC-laced runoff from a DuPont’s manufacturing plant was blamed formajor birth defects and other health issues in Parkersburg, West Virginia. Studies have linkedexposure to the chemicalsto testicular and kidney cancers, obesity and decreased response to vaccines, among other things. The consequences of PFC bioaccumulation are so serious that 200 scientists signed the Madrid Statement to express concern overthe continued production and release of PFCs.

You can’t get rid of PFCs just by replacing your cookware with cast iron. PFCs are also used in durable water repellent (DWR) to repel moisture on many items of outdoor gear, like jackets, pants, sleeping bags and tents.

Many clothing manufacturers, like Adidas and H&M, have pledged to stop using PFCs. Outdoor gear manufacturers have been slow to do the same. While many, like Patagonia, promise to phase out the use of PFCs at a later date, they claim that the current alternatives are just not as effective. If you got cold and wet while mountaineering, you could die from exposure. Or at the very least, be severely uncomfortable.

But the technology is catching up. Here’s a head-to-toe roundup of PFC-free gear for your upcoming season in the outdoors. If a brand-new rain jacket is not in the cards for you at the moment, you can also reimpregnate your older gear with PFC-free waterproofing agents like Nikwax‘s hardshell or softshell wash-in ($13); the company has been PFC-free since its inception.

Scheduled to be released in spring of 2017, the Quintessentshell jacket from Nau ($245) is designed to look like a classic denim jacket but with rainwear features like a removable, adjustable hood, covered zipper and adjustable cuffs. Made from recycled polyester over a cotton lining and impregnated with PFC-free DWR, the fabric resembles chambray but disperses both drizzle and simulated heavier rain (in the shower) handily.

In my testing, the Quintessentshell was lightweight and breathable on long, drizzly walks, even without zippered vents. Like most of Nau’s product line, it passes seamlessly from the city to the woods. Perhaps the most striking feature of the jacket is light, fluffy feel of the cotton lining; it’s like wearing a waterproof duvet.

The Kaipak 28 ($150) is the smallest version of its stripped-down, lightweight technical backpack, with a top-loading main compartment and compression straps on a narrow frame that are ideal for smaller backpackers. The bag is made of a durable, tightly-woven fabric that the company calls G-1000, a blend of recycled polyester and cotton that is then impregnated with Fjllrven’s proprietary blend of beeswax and paraffin.

On my hikes with it, the fabric kept the contents of the top-loading main compartment dry in heavy simulated rain. However, for overnight trips in wet weather, you’ll need either internal dry bags or one of Fjllrven’s optional polyurethane rain covers ($50). After ten minutes in the shower, water stopped beading on the backpack’s surface.

This small, UK-based company is one of the few outdoor gear manufacturers on the burlier end of the spectrum to commit to being entirely PFC-free. Many have signed pledges to phase out PFCs at a later date, but Pramo was the first to sign Greenpeace’s Detox Outdoor Commitment in January of 2016. In February, professional mountaineer and Greenpeace volunteer David Bacci summited Monte Fitz Roy in Patagonia while wearing Pramo clothing, demonstrating that PFC-free garments can stand up to the harshest weather on the planet.

Pramo designed its versatile Adventure Trousers ($163) to be used in all weathers, under all conditions. The fabric is a Nikwax Analogy design, a two-layered system with an outer layer that repels water at the surface and draws evaporative moisture off your skin through the inner layer. The fabric itself is wonderfully comfortable, with plenty of give and a silky feel directly against the skin.

The trousers are as good at dispersing moisture as advertised. They held up in the simulated rain of the shower remarkably well. They are slightly too heavy to be rightly considered all-weather; the pants are thick and warm enough to be used for snowsports, even if they do have two protected thigh vents. However, they were remarkably effective at moving moisture from the inner to the outer layer as well. An hour of determined hiking in 70-degree weather did not produce the dreaded “swamp crotch” effect. 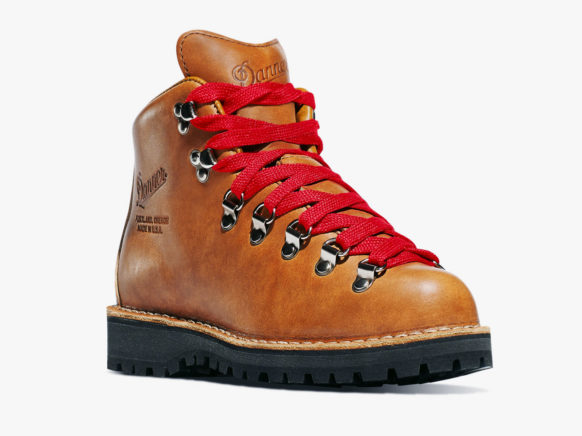 While it’s important to keep your feet warm and dry, traditional weatherproof materials like oil and leather are more than sufficient for a vast range of outdoor activities. The newest version of Danner’s Mountain Light Cascade ($360)—the iconic backpacking boot made famous by the movie Wild—now comes with a thinner midsole for reduced break-in time, a Dri-Lex lining to move moisture away from the foot, and a narrower footbed for anyone who would occasionally like to switch out their heavy backpacking socks.

The boots remained impervious to my simulated rainstorm, even though the leather did darken noticeably (which may be a selling point for some). I recommend cleaning and reconditioning the boots in between treks to maintain their waterproofing abilities.

In the same Greenpeace study, only four pieces of outerwear came back from independent testing with no traces of PFCs. One of those items was a pair the ETip gloves from The North Face, a fleece-lined glove with conductivity in all five fingers for using a touchscreen.

The newest Apex+ ETip comes with The North Face’s new non-fluorinated DWR softshell fabric, called ClimateBlock. Unlike the older version of the ETip, the fleece-insulated softshell fabric repels water handily and all five fingers remain remarkably effective when using a smartphone. (Just be sure to shake off the water first.) It’s not usable for snowsports—after five minutes of full water immersion, dampness crept in through the suede and silicone palm—but it’s more than suitable for cold, rainy casual use.